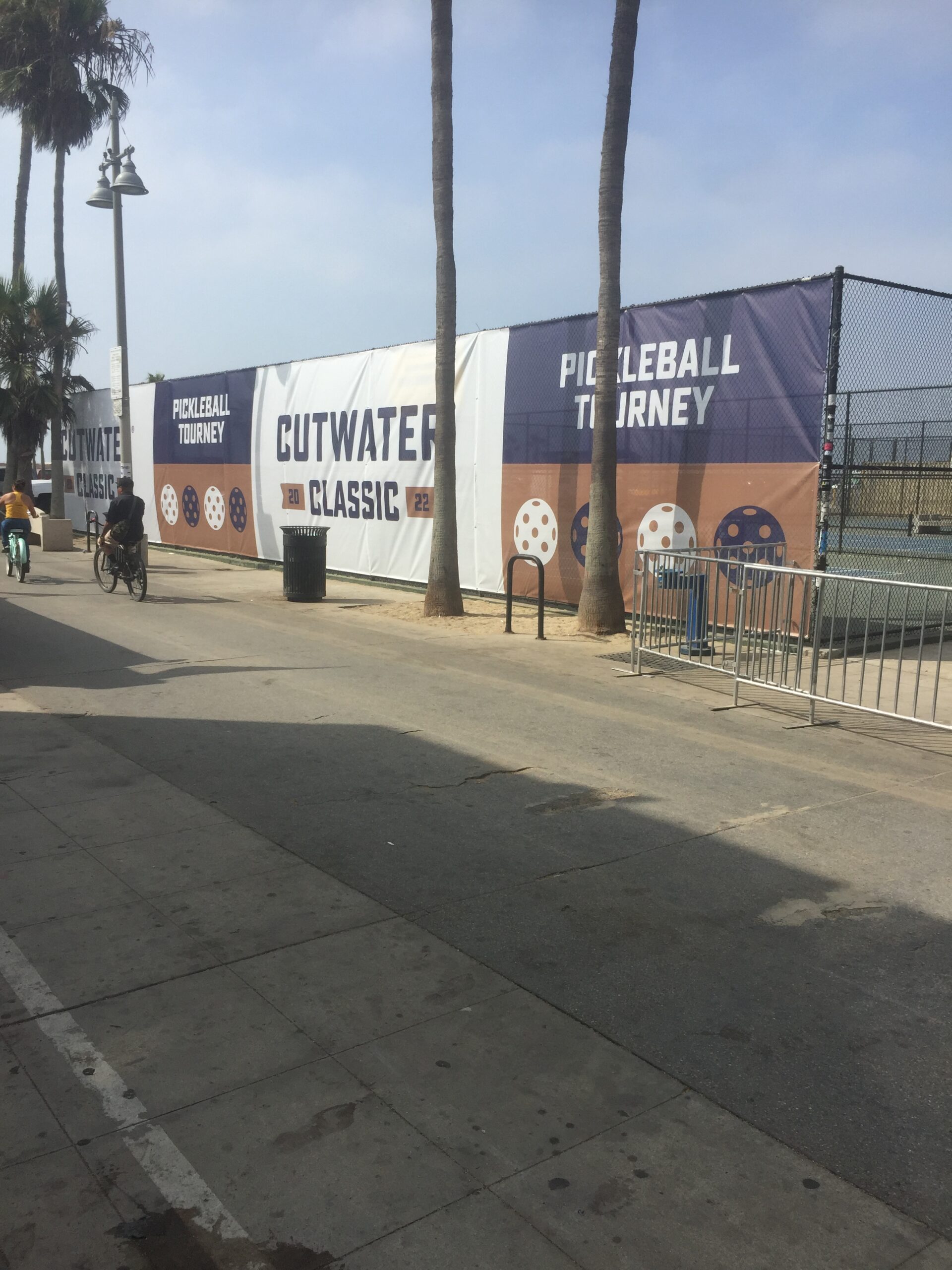 Players – so much has happened in these past few weeks but here is what you need to know:

For the first time in the HISTORY of Paddle Tennis, Venice Recreations & Park has approved a permit for a Pickleball Tournament. A charity event chose Pickleball because they heard it was the “it” sport. Maria Sauer, the event organizer told Mitch Kutner of Pop Tennis that had she known about our Paddle Tennis community she could’ve made it a Paddle Tournament which would have been HUGE for our us. This event could’ve strengthened our sport and drawn attention to our part of the sandbox but it’s clear that Venice Beach Recreation Center really does not give a damn about us. Since it is a charity event, our groups – Street Paddle & Pop Paddle Venice had decided last week to not protest at all. However, seeing the monstrous set up that is happening now, it makes many of us to want to get out the bullhorns and soapboxes. I believe Gino and some of his students will be “standing with Paddle.”

This tournament was not initiated by any major Pickleball sponsor and in effect we have seen no major organizations, like USA Pickleball, promote it out of respect for our sport. Many Pickleball ambassadors were asked “after the fact” and have been helping the agency/client to run the event. Pickleball Pro, Wes Burrows, made the point of coming to our courts a few Sundays ago to throw his weight for Paddle. But who knows, after such a big event will more groups see an opening for more like this?

To add salt to the wounds, this is also the first tournament that Venice Recs & Park is allowing alcohol to be the main sponsor and they are also allowing it to be sold. Now this may be because of a change in a city wide permit application but no explanation has been given to us. It has been a long “standing policy” since the 70s – no alcohol or cannabis sponsors for any tournaments. Can you imagine how much our sport would have benefitted from a sponsor like the current sponsor for this Pickleball tournament? They are offering $2500 in cash prizes and I can’t tell you how many hours have been spent cobbling together gift cards and donations from local businesses and donations from our own community so that our Finalists could win something. It’s hard to not feel like a total chump.

Hey, for what it is worth I’d like to add that Paddle or Pop Tennis which includes the following groups comprised of Pop/Paddle players: The USPTA (Daryl Lemon and Steve Gumplo), Pop Paddle Venice (Christine Lee, Leslie Martino, Katrina Glusac), Popplaya (Scott Doerner, Steve Long, Stuart Rush) Street Paddle (Andrea Carrano, Daniel Wulff) and Pop Tennis (Mitch Kutner), have raised about $40,000 for the City of LA since 2015. It’s a pittance compared to what Pickleball raises these days. As you can see from the monstrous banners in the photo below Venice Recs Center or LA City Recreations & Parks has totally sold their soul to an alcohol company. Wow. 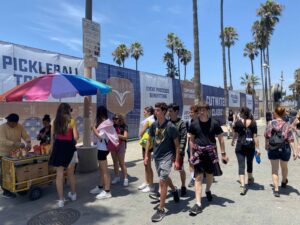 As if Pickleball needs more publicity.

There is another permitted Pickleball group on Fridays from 2-4PM once a month until August. Steve Gumplo and I tried to explain to the leader of the group why their presence at this prime time could negatively affect our community but he had a ‘everyone should be able to play what they want attitude.’ Melody Valenzuela, of Venice Rec & Park, did not mention anything to him about Paddle Tennis. In contrast, other permits like the Crossroads School that were approved under the previous administration, promotes Paddle Tennis. Kids play paddle for P.E. once or twice a week during hours that are not “prime” hours at least a few times a year. This kind of permit makes more sense for our iconic and niche sport because it promotes our sport to future generations and it doesn’t take time away from people who play paddle. The current administration at Venice Rec & Parks should be made aware of this difference.

We need to demand that  the Venice Beach Rec & Parks  “have our backs” when it comes to new permits – not just give our courts away like they have done as of lately. They do not understand that the impact of more Pickleball permits is that even more Pickleball players come to our courts and expect to play. “Duh.” With absolutely no signs on any courts, except one banner high up on the fence of Court 1, it’s hard to tell a Pickleball person to walk over there on a busy weekend and risk giving up a court to verify.

Our community has been incredibly tolerant. No more! We’ve endured trash, decaying fences that are dangerous, dirty, sandy courts with no cleaning schedule ever posted. We have tried to put up art banners to patch the holes – and temporarily patched the holes with netting and plastic out of our own pockets – instead of demanding they get repaired immediately and we have done our best to elevate our sport by staging tournaments on our own dime (literally the core group of Pop Paddle Venice pitched in to pay for the tee shirts for the five 2019 tournaments and Robin Antiga designed them for free). This tournament is a total slap in the face of all Pop Paddle players and, really, against any closely knit community like ours that has generations of people who want to pass on something to future generations. 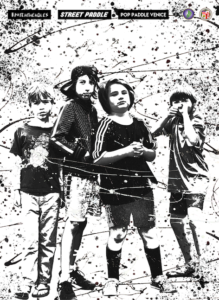 Email LA City Recreations & Parks and let them know how you feel. Encourage them to be Pro Pop Tennis or Pro Paddle Tennis and celebrate the fact that our sport is as iconic as Muscle Beach and the Skate Park.

Let them know they should stop allowing any Pickleball permits because it causes conflict on our courts.

Sonya Young-Jimenez, Regional Director,  has said she would not paint Pickleball lines on the courts when they get re-surfaced but we should ask that, in light of these Pickleball events, that she keep her promise.

We also need to demand a seat on The Park Advisory Board. Apparently they are too “busy to hold elections.” We need ask why this is happening?

What you can do:

We are truly an awesome community and we need to show Venice Rec & Parks that we deserve better, if not “The Best” treatment ever. Our sport may not be as popular as Pickleball but it deserves the stage that we’ve helped to build since 1962.

So send that email right now:

Leave a comment on their page on the Venice Neighborhood Council page.

Join our Venice Beach Paddle Tennis Historical Committee. We need people who can dedicate their minds and really put in some elbow grease. Do you have connections to the Media? Do you have an organization that would put on a paddle tournament? Do you do graphics, Tik tok? Write grants or articles?  We’d all like to be playing more paddle but if we do not act now, our fate is uncertain.

Always look on the bright side…

One of our paddle veterans asked the #1 Pickleball player, Ben Johns, if Pickleball is planning to take over the Venice courts. Johns laughed and said something to the effect of, ‘why would we? We have many more places to play that are a lot nicer.’ This is the first time decaying fences, dirty courts, and sad public bathrooms have worked in our favor.

Robin, our designer of the art banners and of many t-shirts for Pop Paddle Venice and Street Paddle, thinks we should approach our sport like an endangered specie. With Pickleball spreading like an invasive predator, our sport may get some love from people who champion the Davids vs.the Goliaths and the ultimate underdogs.

I’ll be in a better mood on Sunday at Noon.

See you on the courts then,

P.S. this weekend is a good time to check out courts in Culver City  or Fox Hills!

Art banner of Next Generation Paddle Players by Robin Antiga