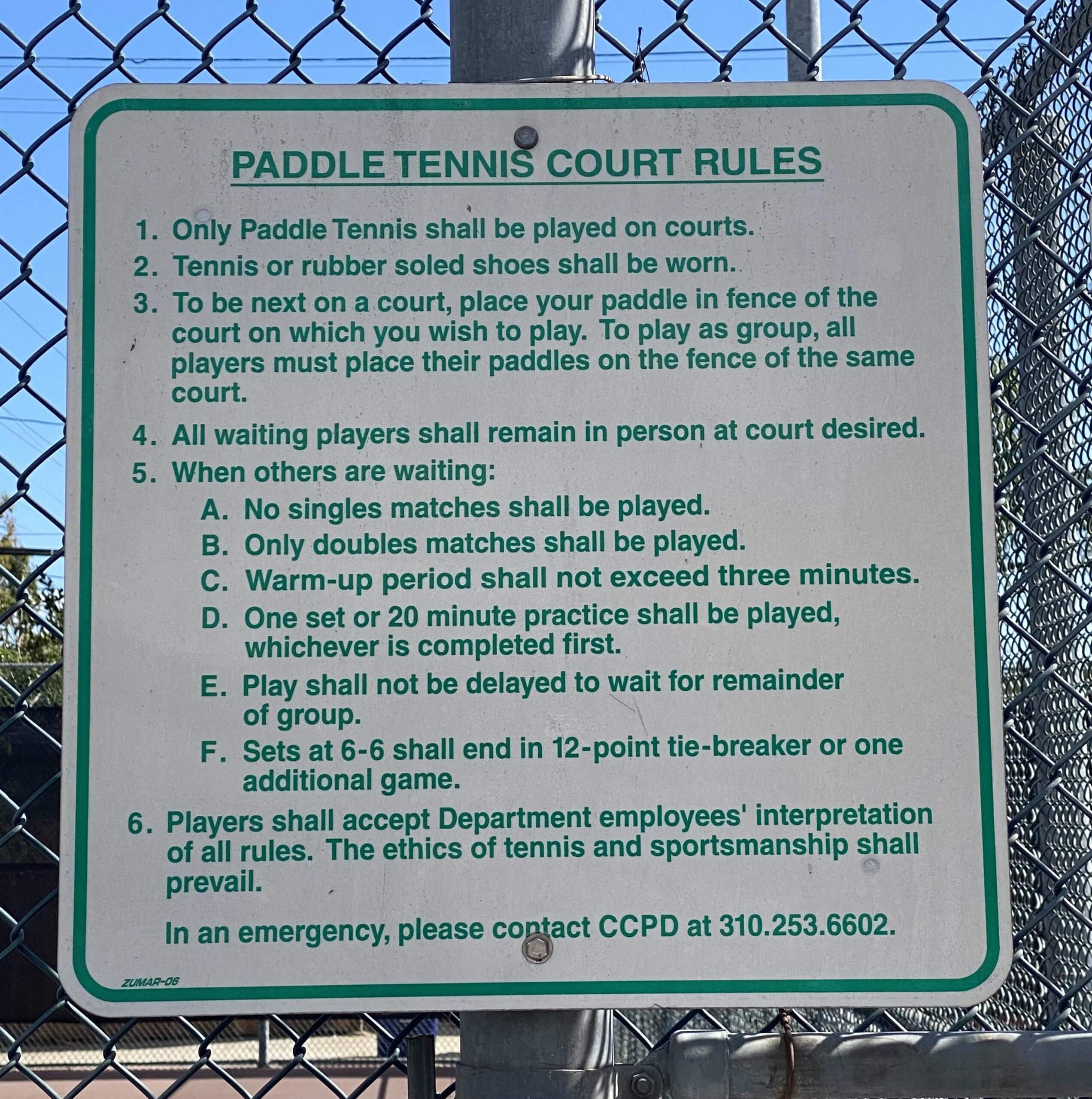 The Culver Court Rules – An interview with Romy Hightower

Playing paddle at the Venice Beach courts can seem like the ‘Wild West’ when it comes to getting a court and finding people to play with who are challenging competition. The Venice courts have been known as the place to “pick up a game” but as the courts become busier, that can be difficult with groups of friends who rotate on a court for hours. If you are a well loved “regular” then you may not have a problem but if you are a new player or a beginner, then playing in Venice can be daunting.

At the three Culver City Courts, it’s a different rodeo.

The plaque designates them as  “America’s First Paddle Tennis Park.” These courts have rules and these rules are followed. Just ask Romy Hightower, veteran player and paddle ambassador for many years. 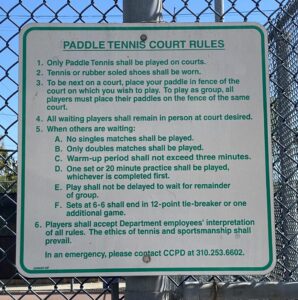 The main rule to take note of is what Romy calls: 4 on, 4 off. This means 4 people play one set, they get off. The next 4 players get on. If you ask Romy who wrote the rules, she’ll tell you – it has always been this way. 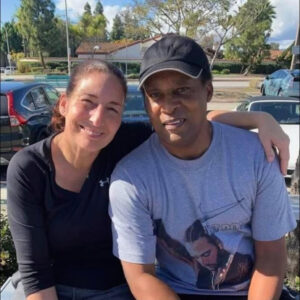 Romy was a softball player but she started playing paddle at 16 when her big sister, Dale,  brought her to a paddle clinic taught by the Culver City Rec & Parks. That next weekend she played her first of many tournaments. What she loves about paddle is that “it’s exercise but you don’t realize you’re exercising because it’s fun…and I can be appropriately aggressive.” For many years, Romy would play at Venice until it got dark and then she and her friends would play at night under the lights at Culver.

It’s understood that the reason why the rules at Culver exist is because Romy is willing to be the firm but friendly sheriff. She has no problem enforcing the rules and this has perhaps created a close Culver community where people know they can get a game, at any level.

Well-known community members like Daryl Lemon will train his students and then say, “go play with Jack and Romy because they welcome everybody.” You can play with Romy and her partner of 13 years, Jack Shepherd, most Tuesdays & Thursday nights 7:30-9:30PM. Her presence ensures that everyone gets a chance to play, that no one hogs the court all night, and that new players get to play with some veterans. But, she’ll also step in when some higher level matches need to be played. She’ll take newer players aside and say “you know- we really want to welcome you here but we also want to keep the level of play good so play a set or two but if you see that you are the weak link, take a break, watch a little bit…”

The most important point that Romy wants to make is that while she does take charge of the courts when she is there, she wants people to be in charge of themselves and to not be afraid to tell people the rules. She says, “they perceive me as the sheriff but what I’d like them to do is to be deputies and not rely on Jack and I.” This notion can certainly be applied to the Venice Courts as well.

Being an ambassador to new players has it’s perks

Romy says, “When I used to play at Venice… there were people that wouldn’t want to play if you weren’t their level- that hasn’t changed but you know I have a funny story. One time Jack and I were playing there and Derek Rostagno came up and he had a girl with him and he was trying to get on a court and they (the people playing on the court) didn’t know who he was so they told him to go and play with Jack and Romy ‘cause they play with anybody.’ So he comes on the court and he’s Derrick Rostagno! He was amazing. And he’s been our friend ever since.” 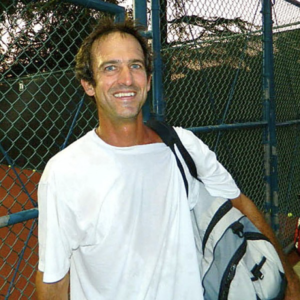 Derrick Rostagno played tennis at the 1984 Los Angeles Olympics in the demonstration event. A student at Stanford at the time, he turned professional in 1986, and eventually claimed one ATP singles event, winning at New Haven in 1990. He also won a doubles title at Tampa in 1993. His best performance at a Grand Slam came at the 1988 US Open when he reached the quarter-finals. Rostagno’s highest world ranking was #13 in 1991.

What happens with Pickle Ball at the Culver Courts?

Romy says, “I tell them these are not pickle ball courts, these are paddle 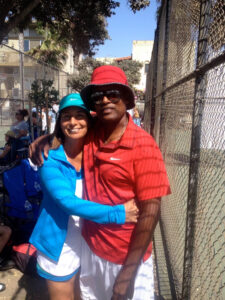 courts and I tell them where the pickle courts are located. I am not anti- pickle ball but I support paddle. I just don’t want pickle ball to have priority on a paddle court! I tell pickle ball players that they have to come on and off the court just like we do. Sometimes they will come with a group and say they will just rotate but I tell them, ‘no, it’s 4 on, then 4 off’ and once they see that we are following those rules, they go with it.” 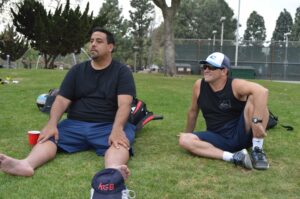 Romy has played paddle all over Los Angeles and also organized an all city paddle picnic in 2014. Players from every park: Venice, Culver City, Fox Hills, Wilson Park in Torrance, and Ladera Linda Park in Palos Verdes – they all came with their families to play paddle, frisbee, soccer, softball, and more. 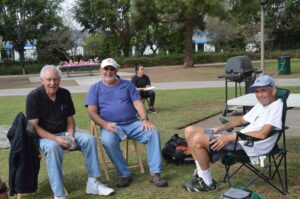 “One of the reasons I wanted to do it is because I felt that the paddle communities were divided. I played everywhere so I knew everyone. But the main reason I wanted to do it was because I wanted a family friendly environment. I don’t drink or smoke and I don’t have issues with people who choose to but I just wanted to be able to have fun and not have that be the focus! There were people who brought their own alcohol but the events were very family friendly.”

Romy and Jack also organized a softball game for paddle players at Veteran’s Park. After the game, they finished the evening with a catered meal. (We would definitely like to do a picnic like this in the near future – if you would like to help organize, please let us know.) 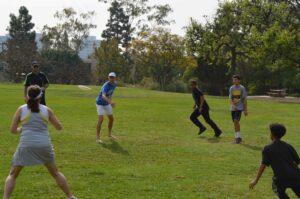 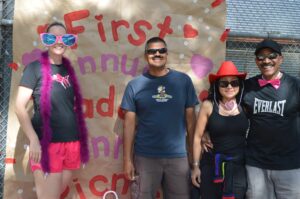 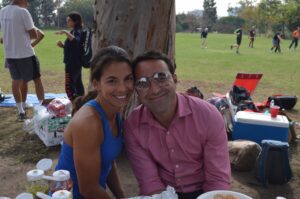 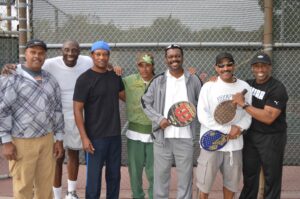 On or off the courts, we want to thank Romy for her leadership and for taking a position that isn’t always fun or popular – being the police woman of the courts. Instead she insists, “we want the paddle community to be invested, not compliant. If everyone only listens to me then it isn’t a community. I don’t want people to think that the Culver Courts are just for beginners. I want everyone welcome but I also want Venice to step it up!

Have you noticed the weathered baby blue signs with the retro 70’s font at the Venice Courts? 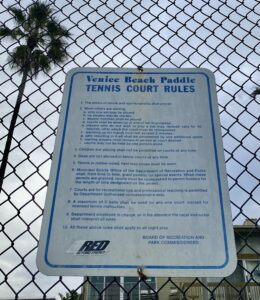 They have faded into the background (and are located in odd places) but the rules have always been there, too. And in addition, Venice Rec & Park has added their signs on the doors of several courts that relate to Covid-19 rules and pickle ball times. By mentioning this very issue I realize I am opening  a can of worms but since our community has become so much tighter just in the last few weeks since Street Paddle, “The Tour” started, I feel it is something we can all start to think about. 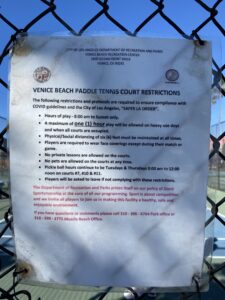 While Venice continues to be the main location for paddle, the lessons learned from observing the Culver Courts can help our sport grow and not just in Venice. When Romy says, “Venice needs to step it up” – I interpret that to mean that Venice needs to set an example –  to be a little less selfish. If we have been playing the allotted hour and people are waiting, no matter what level, give up the court, take a break, maybe watch others, and find another court. You may end up playing with Derrick Rostagno! If you see people who have set up couches and a bbq on a court and are not leaving – be a deputy and nicely tell them that these are public courts, ask them to finish their hour or last set (Venice Rules) and kindly pack up.

Given that the New York Times is writing about pickle ball, our community needs to shift gears and get more people playing paddle on every court available – throughout Los Angeles, Michigan, New York and Florida. Pop Tennis is doing a great job of expanding our game to Europe and Australia. Let us fill every paddle court possible with people who feel connected and passionate about our game and not turn anyone away who wants to play because they can’t get a court. If we start to do this work as a community NOW, we will avoid a showdown with the other sport later.

A question for Paddle Players –

Do you think the Venice Courts could ever be like Culver City? Why or Why not?

Use our Anonymous Suggestion Box