By Editor Christine LeeMarch 9, 2022No Comments

It’s been a Whirlwind 1st month for Street Paddle! From the first ‘kick off’ party held at the rooftop bar at the Hotel Erwin to all the matches we have witnessed or heard about – this month flew by. So many new friends, new faces that are now more familiar, and a lot of great paddle!

It’s fitting that the last day of “the Tour,” Round 1 was a crazy windy March 5th. 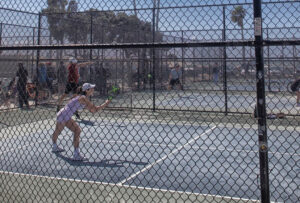 What does it say about Us – that so many players (was it really 12 groups?) waited until the last day to schedule their match? You think having an entire month to schedule  would be ample time to reach an agreed time and place with people who have wildly different schedules. Or that it would give you enough time to scope out each opponent, maybe even pre- play with them? It was as though the Gods of Paddle decided to punish the mortals for waiting so long by kicking up the winds to 21.9mph from the usual yearly average of 7.2mph that day.

Despite the weather, there were incredible matches and amazing points all over our 11 courts that day. Many people came out to watch and brave being sandblasted and sunburnt all day. Strangely, the wind was fitting for our sport – it really emphasized the drama and the fun! 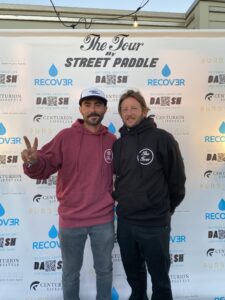 “We couldn’t be more excited about our 1st month – the turnout has exceeded our expectations. So many good points, so many good people coming together. This was a great first step in unifying our community.

And to address the last day – some of the best paddle I’ve ever seen happened on that windy day in all levels – Open, A1’s and A2’s. But we really suggest that you don’t leave your match to the last day of the round – otherwise you may end up with no other options but to play on a bad day. Hopefully this round, people will get their schedule done earlier. Give yourself time to change the date – just in case!”

The New Point System – goes into play this round but you won’t see the effects of this change until next round, Group Play 3.

Andrea explains “As our community grows, and we build this ranking system, we are learning where we can improve things. In the rankings, because of the point system, you’ll notice there will always be a 3-way tie. There are 2 scenarios in a round-robin tournament in doubles: either 1 player wins everything and the other 3 players tie for 1 win and 2 losses. Or 1 player loses all the matches and the other 3 players tie with 2 wins and 1 loss. It’s really that simple – there are only those outcomes so Wulff and I noticed that when the other 3 people are tying, they end up with the same score and more than likely at least 2 of them will end up in the same group.

Because we realized that this could happen over several months and the whole point is to have as many different people play each other, we decided to change the point system very slightly.” 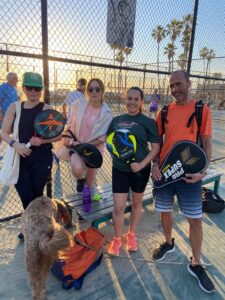 “Now whatever group you are in, instead of having an equal points when you tie, your game differential will decide who wins the most points in a 3-way tie. It’s going to be 1 point differential. For instance in group A, if 1 player wins all the matches, they get 50 points. There is a 3 way tie for the 30 points, the player with the highest differential gets 31 points, the next player who won the 2nd most games gets 30 and the last player will get 29 points. It’s all listed in the rules. We are just distinguishing the 3-way tie by 1 point and believe or not – that 1 point mixes up the entire draw. It allows people in the group under them to move up and for them to move down. Right now everyone is grouped together in the same group.

We didn’t want to put this new rule change into affect for this round – because it would change people’s rankings right now but this change will take affect as of the beginning of Round 2. So schedule of Round 3 will be affected by group play 2. We didn’t want to change anything last minute and we wanted everyone to understand the new point system first before we added this ‘1 point differential. 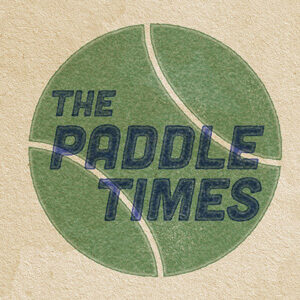 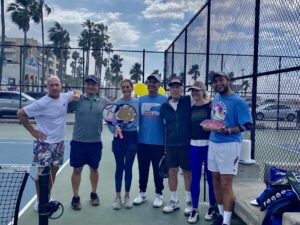 New Things: The Street Paddle Team has really worked hard on so many fronts to put together a full experience for our community – here are few announcements:

-1st weekly Street Paddle Newsletter went out today in your email with links to everything that is happening. You will receive this every Wednesday.

-New online shop for hoodies and t-shirts. Each clothing item has the option to customize the color of the logo! What?!!

-Please send us your photos so we can include them in our gallery. You can direct message or tag us @The Paddle Times.

-You can always check out some fresh paddle highlights at Paddle Legends. Are you a legend yet?

Lastly, The Paddle Times received an anonymous comment in response to our last article;

“Culver feels more instantly welcoming because everyone gets a chance to play. That said, it’s hard to get in a groove playing only 1 set at time and not knowing the level of the opposing team. I spend most of my time playing at the Venice courts though. Venice’s community is incredible, but it took a while to feel like I was a part of it. Enforcing a 1 hour limit at Venice sounds nice, but has the potential to take away the “pick-up” feel of the courts. I love showing up and playing with a bunch of different groups for hours on the weekend. I like the idea of a couple courts being designated “challenge courts” certain times of the week. Winner stays on unlike at Culver. Love what the Street Paddle folks are doing. Please keep it up!”

Thank you for your comment. I think a few monitored courts that are “challenge courts” or “4 on 4 off” could be fun – just need to find someone who is willing to do it. Are you? Let me know.

If you would like to send an anonymous suggestion – here’s the link. 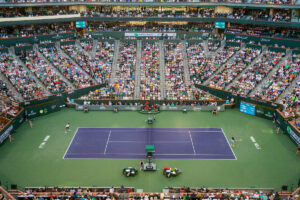 This week I’ll be attending my first ever trip to Indian Wells Tennis Tournament and offering some tips and insight into that tournament and more at The Paddle Times on IG.

Until then – play paddle or go home!