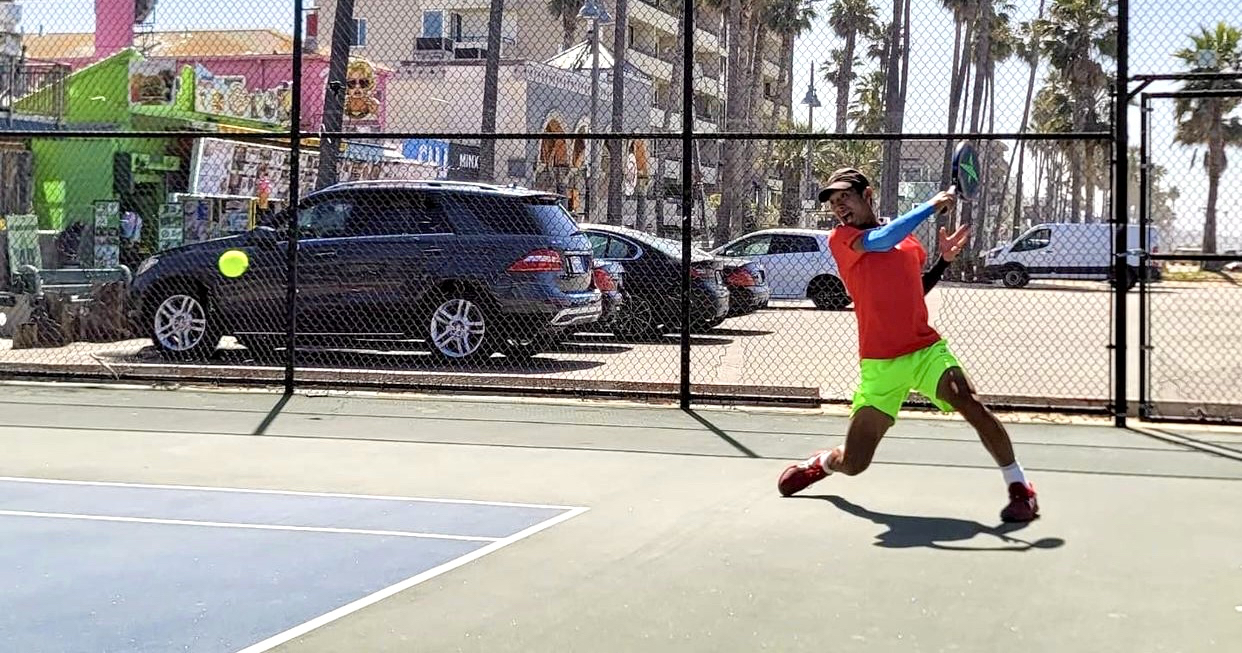 On The Bench with ‘Avatar’: The youngest Venice paddle tennis champion 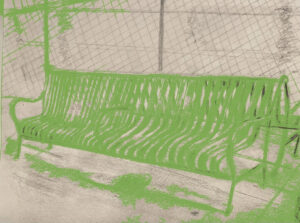 This story is part of the On The Bench interview series, which profiles members of our diverse group of paddle players.

This week, The Paddle Times sat down with 16-year-old Quang Duong, who you may know around the Venice courts as “Avatar.” Born in Manhattan Beach, the tennis prodigy recently added to his already impressive resume — which includes an Orange Bowl title — when he won the National Singles Paddle Championship in April 2022. He became the youngest paddle tennis champion crowned in Venice Beach.

Where does your nickname ‘Avatar’ come from?

Quong is my English name. But my dad started to call me Avatar, and about two years later, the TV show came out and we fell in love with it. We’ve stuck with the name Avatar ever since. 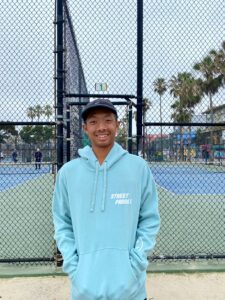 How did you find out about the national singles tournament here in Venice Beach?

I heard about this tournament from Brian Wan. He said, “If you’re free, play it.”

I was excited, but I was also really nervous coming into this one because it was my first paddle tournament in three years. But it was really fun and I had an amazing time here.

So you register for the tournament and immediately have to shift from preparing for a tennis tournament to preparing for a paddle tournament. We saw you at the courts the week leading up to the event. You were training a lot with the veterans of the game. Can you tell us about working with them?

It was fun, intense, and a lot of learning. I played a lot of practice matches with Brian and I never beat him. The tournament was actually my first time ever beating him.

I also practiced a lot of doubles with Russ and Ernesto. They’re never afraid of the ball. They always move forward and I learned that I need to keep moving forward.

Your dad used to play paddle back in the day. Did he help you prepare, too?

Yes. My dad will tape me, watch how I play, and then tell me what I did wrong.

And before any matches — practice or tournament — he will train me for an hour or an hour and a half. He’ll get out the basket and drill my weaknesses.

The tournament starts. What was the experience like for you? How would you describe it to your tennis friends?

Some of my friends already knew about this sport. Some of them texted me wishing me good luck and, afterwards, told me congratulations. Some of them play paddle in Florida, but the players aren’t as good as they are here. I think the best paddle tennis players are here in Venice Beach.

What do you think about the scene at the Venice courts? The boardwalk is noisy and chaotic. There’s a lot going on around you when you’re on court. How does it compare to the tennis tournaments you play in?

At tennis tournaments, everyone is more intense and nervous. We never talk to each other that much. But here, in Venice, it’s more social. And it’s nice to be right next to the beach. It’s a good change of pace.

There were over 100 spectators at the championship match. You were on Court 1 and playing against the current best player in our sport, Brian Wan. Were you used to such a big (and rowdy) crowd?

At the Orange Bowl, I played this Italian kid in the semifinal and literally the whole Italian team was there. The only person in my corner was my dad, and he never cheers for me. He just stays quiet. So I’m used to people cheering against me. But it motivates me. I’d rather people cheer against me than with me.

In the final with Brian, it was an honor to play on center court with such a big crowd. It was really fun to have so many people watching. And, of course, it’s very intense here. Everything happens so fast and with Brian’s speed coming to the net, you barely have any time to react. The moment you hesitate a little against him, you’re dead. 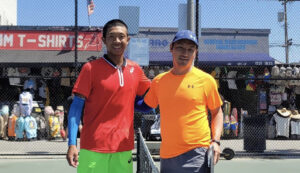 Was winning this tournament a “bucket-list item” for you?

Yes, kind of. A few years ago, I won in the A’s category when I was 14. I thought it would be nice to win in the Open division but I knew it was going to be really tough. We stopped playing tennis for a few days just to train for this tournament.

What was your favorite point in the tournament?

It was a string of points: I was down against Brian in the first set, 4-5, 0-40 and I hit some crazy shots. I hit a passing shot, a lob, and a forehand passing shot crosscourt. I came back and won the game to make it 5-5.

Let’s shift gears and talk about your main sport. When did you start playing tennis?

I first held a racket around four, but I started playing seriously around six or seven with my dad. He’s always been my coach. I’ve had a few other coaches in tennis camps but I would always rather train with my dad.

Do you play any other sports?

I do a lot of swimming. I started recently getting into pickleball, ping pong, badminton, and soccer as well — for footwork. I don’t play any of them competitively. It’s all for help with my tennis and that’s it.

The Orange Bowl is the tournament that every junior player wants to compete in. You played it and won it. What did it feel like to win such a prestigious event?

It was great. It was fun. I feel proud of myself for that tournament. But right after I won, the day after, my dad told me: “Okay, you did a good job but it’s over now. Focus on your next tournament. You can’t let this win get to you. Just act like everything is normal. You didn’t win anything.”

You have to train so hard to win tournaments like the Orange Bowl. Can you tell us about your routine and how you prepare to win such big events?

We wake up early most of the time. And we increased the amount of time I train. We used to train an hour and a half a day and now it’s two and half hours a day, plus we added in more fitness. Of course, resting is also a key to playing well so that’s why we incorporate things like paddle tennis.

Every day is different, but usually the tough days will be an hour of fitness in the morning, two hours of tennis, an afternoon break, and then around 4 or 5pm, another hour of tennis. Then, we do more fitness in the evening, but it’s more mobility, like stretching for recovery.

Do you go to high school? 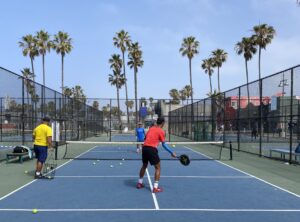 Avatar with his Dad and little brother.

I do international online school so I can focus on tennis.

Those are long days. What motivates you and keeps you going?

Mostly the competitiveness. I like competing a lot. And when you work hard and win something, it’s rewarding. I like when working hard pays off.

Is it more the winning that drives you ​​​​— or are you more motivated by not wanting to lose?

Well, if you lose, you learn. You learn a lot from losses and can improve on your weaknesses. That’s another motivator and thing that keeps me going: working on weaknesses.

If you keep winning, you’re not going to learn anything.

So, would you consider yourself a good loser?

Eh, I can take a loss pretty well. I have a few I can’t forget, though.

What’s the best part of your game?

My mental strength. Or my forehand. I really like my forehand and run around it a lot.

What is your mindset during big matches?

Kill the ball. Have confidence and don’t hesitate. In any sport, if you think you’re going to miss, you are going to miss. It’s happened to me many times and my dad told me: “It’s okay if you miss. But go for it. Don’t hesitate. Don’t think.” And that really helped me.

What do you tell yourself when you’re down in a match?

If you’re down and you keep thinking about how you’re down, you’ll get more nervous. Honestly, I don’t think. I actually sometimes perform better when I’m down. I just don’t think. I focus and I go for my shots.

What’s the most memorable moment of your tennis career to date?

Probably the last point of Orange Bowl and winning that tournament.

Or, this year at the Australian Open: In my last qualifying match, I was down 0-5, 0-40 in the third set and, out of nowhere, I came back. I won the set 7-5 and made my first main draw for a junior Grand Slam.

Who is your tennis idol?

You have a demanding tennis schedule. Why do you make time to play paddle?

Paddle tennis is great. Every time I come here, I have a good practice and a good workout. I like the intensity as well.

If there was money in paddle, do you think your dad would have you play it instead of tennis?

That’s a long shot. My main focus is still tennis. But paddle definitely helps a lot with my tennis career, with the slicing, transitioning, passing shots, and also the fast reaction — you need fast hands in paddle.

The paddle court is way smaller than the tennis court. There’s less space and it’s harder to hit a winner. How does it feel hitting a winner in tennis versus in paddle? Is it more rewarding to hit one in paddle?

I hit a lot of winners in tennis because I have a very aggressive game. It definitely feels pretty nice to hit a clean passing shot winner in paddle. You really have to thread the needle.

How does paddle compare to tennis in general?

First of all, with passing shots, it’s easier to pass in tennis because the court is so big. And you need fast hands in paddle — you have less reaction time, especially in doubles. My tennis doubles game has improved since playing paddle. Before, I didn’t like doubles but now I’m standing like an inch from the net and improving a lot on my volleys and reaction time.

How would you describe our paddle tennis community in Venice in a couple of words?

Amazing people. And they all help me with my game. Everybody is so nice. Even the people working the stalls. Every time I play pretty good, I ask my dad if I can get a treat, like ice cream or something from The Window. And recently, I went to the It’s Sugar Candy Store  here for the first time ever and got sour candies. My dad said, “You’ve been on a strict diet for two weeks — today you can have some fun.” 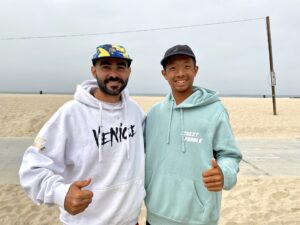 I don’t know if you’re aware, but because you won the National Singles Championship here, you get a wild card into The Tour finals in December. There’s big prize money and the best 16 doubles players in the world are going to be there. Are you looking forward to that?

If my schedule allows it, definitely. I’m really looking forward to it.

I’m sure we’ll see you out here training then?

Yes. I’ll be out here training with anybody I can find.